So sanding is hard..... how could I have forgotten that?? I've called in the big guns. Grandad Guy is dropping round his orbital sander! Seeya later 29 layers of hideous green and bluish paint. And also seeya later torn up hands from wielding the sandpaper.

After sanding and undercoating the first chair yesterday and removing the green paint that had graced my grandparents kitchen of 25 years ago, I asked the Little Guy which colour we should use first? His response... green (because it's his favorite). Can't we start with one of the other colours for something different? No apparently.

Anyway I've gone back to some of the gentler arts with a little bit of crochet. Much nicer on my hands. 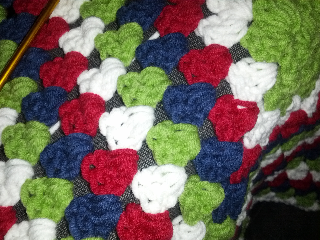