A few years ago my in laws grew a butt load of Kale. Blue Kale I believe, not curly Kale. After eating it steamed and in stir fries they were starting to crave new avenues. I'd vaguely seen something once on the TV about Kale pesto.

So one day my mother in law and I set up a full on test kitchen to try and make a dent in the huge backlog of Kale. After experimenting with different combinations we hit the Kale pesto sweet spot. 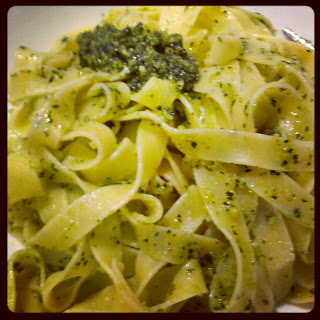 So would you like to know the magic combination? Since Kale is the new super food and all.  Assemble the following: Kale, parmesan cheese, pinch of salt, blanched almonds and macadamia oil. Toast your almonds and assemble your pesto as you would normally and blitz. Now you can use olive oil ( as I did the other day) but macadamia oil just adds another layer of flavour.

This pesto is really good on pasta.... and rice cakes as I discovered at lunch time yesterday.
Posted by Unknown at 7:53 PM

We love Basil Pesto! So this looks yummy too, maybe I need to try growing some kale!